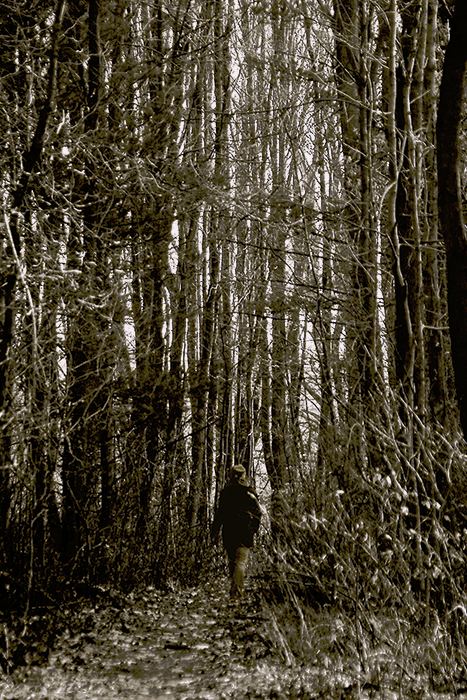 “Kate”  A Walk into a New Year

Fourteen years ago today I took a photograph of my wife, Kate, as she walked the same path that had led to the title of my first book, “The Way Home”. Oddly, other than birthdays and holiday snap-shots, it was the first time I included a person in a photograph I published.
Ten or fifteen paces ahead, and unaware I was taking her picture, she maintained her usual brisk, deliberate gait, always seeming to know her heading, if not particularly concerned about the final destination. Earlier in the day gray clouds had descended into the dull opacity of the season, all but absorbing the landscape’s color. Worn black from deer passing, an earthy redolence of the forest floor was suspended in the air along the path as it meandered through the tall, close-quartered beech and white pines competing for sunlight. By late afternoon and the end of our walk the metaphoric veil of gray was lifting, light finding its way between the trees, revealing a clearing ahead.
From time to time I look at this photograph and wonder how an elemental image holds the capacity to evoke such emotion in me, or to communicate qualities of an individual or the relevance of a place it depicts. Moreover, it calls into question how much of our own experience and existence can be ascribed to or reflected in our art – a fundamental question for any work I suppose. An artist’s perception, of course, relies as much upon personal experience as on his/her powers of observation and attempts at objectivity.
What others may take, if anything, from this particular image is difficult to know. From the general lack of detail, a random viewer might see only the banal, an androgynous figure, an indistinct path and a locale sufficiently lacking in context to place. For me, however, the photograph captures Kate’s authenticity, humility, and reverence for the natural world, the same qualities I’ve valued in nature and that have illuminated my way home through difficult times. Presumptuous to think others might have similar notions about this photograph but one must ask, even rhetorically; is there not some universality in an image or any work of art, symbols perhaps that transcend the experience of the artist or viewer, that, in the end, confer meaning?
I send this image on as an expression of gratitude and love for Kate and as a symbol of mystery and goodwill to each of you as we embark on the new year.
Geoff
Read More
Wed01 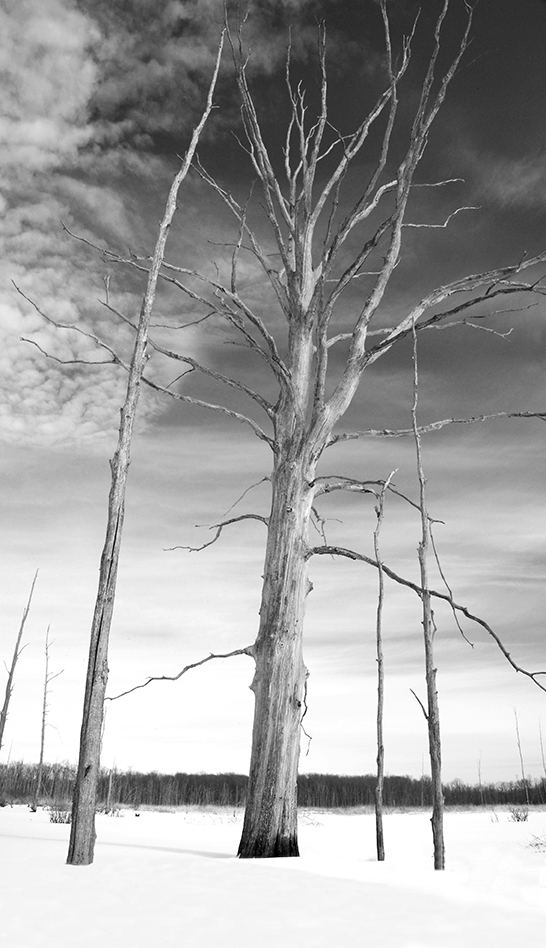 In a couple of his poems (“After Apple Picking and “Birches”), Robert Frost summoned both imagery and metaphor through the phrase, “toward heaven” and “toward heaven still.” I’ve often thought this towering pin oak, anchored in less than three feet of water at the north end of Schweitzer marsh, was “pointed toward heaven still”; ascending from its base, reaching into the firmament.

Exploring the marsh, beech groves and hawthorn gauntlets as young boys of ten or eleven, my friends and I could always spot this tree above the others and orient ourselves. The pin oaks pictured here were already dead and ghostly by the mid 50’s, almost seventy years ago, yet the grove “still” stands.  More than I can say for myself at times. 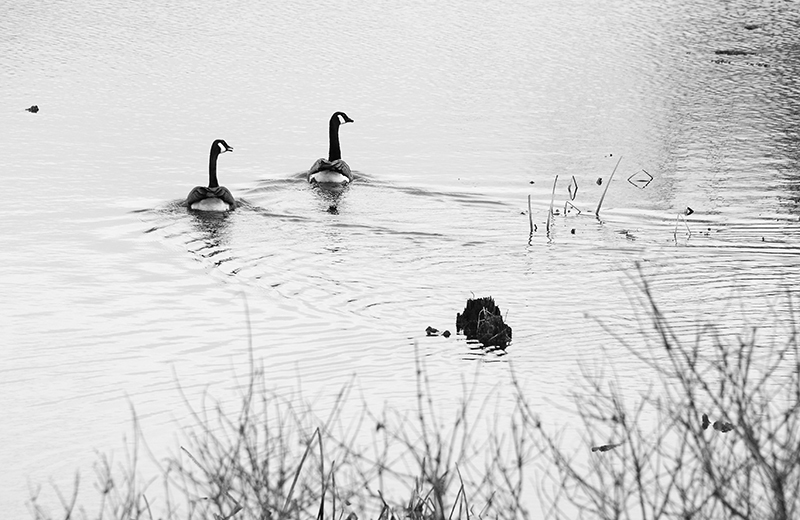 My preoccupation with geese traces to childhood and the scarcity of what now has become abundant. This is the second in a series. Note, the gander trails the female always protecting his territory.

What works (I think) about this image is the context (marsh sedge in the foreground) and the center focused composition. 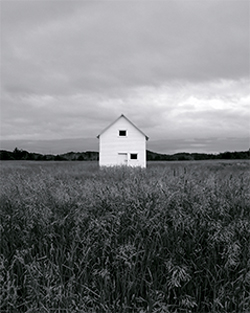 After printing this image I tried to imagine whether the scene would have appealed to three of my favorite artists, Edward Hopper, Grant Wood and Andrew Wyeth, each whose work may be considered an example of modern American realism. I think the almost surreal landscape would have attracted Wyeth; the nostalgic throwback, Wood; and the solitude of the scene, (especially the isolation of the towering outbuilding), Hopper. I mention these artists because, for many years I’ve been drawn to their work and suspect it has influenced the way I see landscapes and architecture.

This outbuilding resides on the property of Carsten Burfiend, the first settler of Leelanau County.  Mr. Burfiend built two farms in the late 19th century just north of Glen Arbor. The farm is closed though restored and sits between a spine of dunes to the east and Lake Michigan less than a mile west. 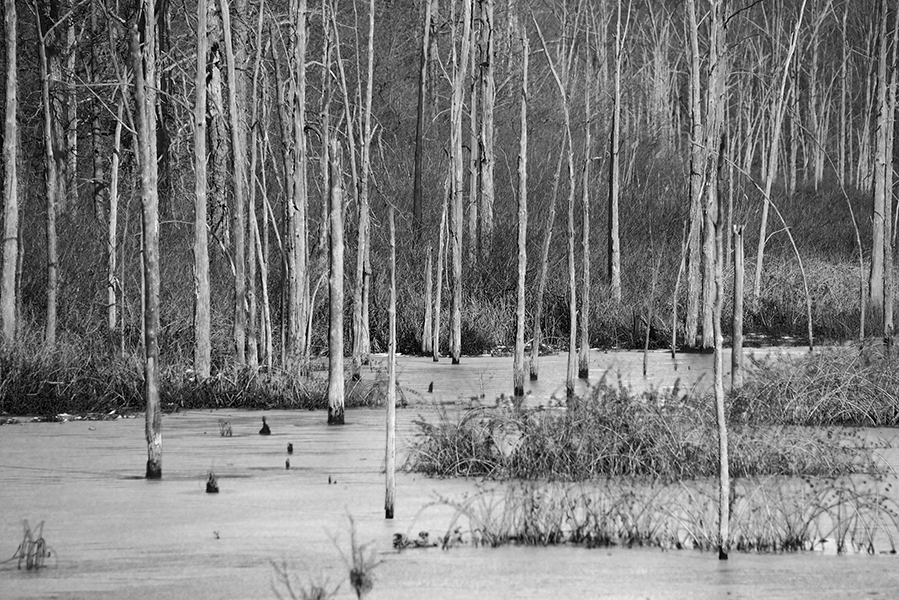 Not a sound at the marsh today (January 1st, 2017). Hundreds of acres covered with a thin sheet of ice, perforated only by tiny islands of marsh grass and dead pin oaks. The few remaining geese and ducks have moved to the open water of lakes and rivers. Not a sound, not even “the sweep of easy wind …”.

Groves of dead oak still stand in silence after more than fifty years, gray with age but unaffected otherwise. Today’s blue sky and early afternoon light accentuated the bleached wood and made for a dramatic black and white image close to shore.

The blanket of snow last year (see “Sentries” https://stillpoint-gallery.com) contrasts with this first landscape of 2017 – ineffable beauty waiting for us in the starkness of the season.

“Solitude gives birth to the original in us – to beauty unfamiliar and perilous … to poetry.” Thomas Mann 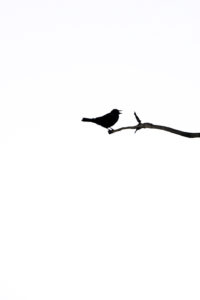 “First Note”
Among the blessings conferred by early morning excursions into the marsh has been the opportunity to observe Red-Winged blackbirds as they usher in the day with their first notes. In the morning twilight, almost an hour before sunrise, this blackbird was first to rise from the marsh to greet the morning with its song. Abruptly, the landscape erupted in a cacophony of disparate songs; harmony in its dissonance.

Isolated on a dead pin oak before sunrise and silhouetted, Kirie-like against the eastern sky, its colors were indiscernible. It made more sense to process this photo in black and white without the slightly hued and muddled colors of the predawn sky.

This is a moment I wish for everyone.