Posted on Jul, Fri, 2021 in Uncategorized 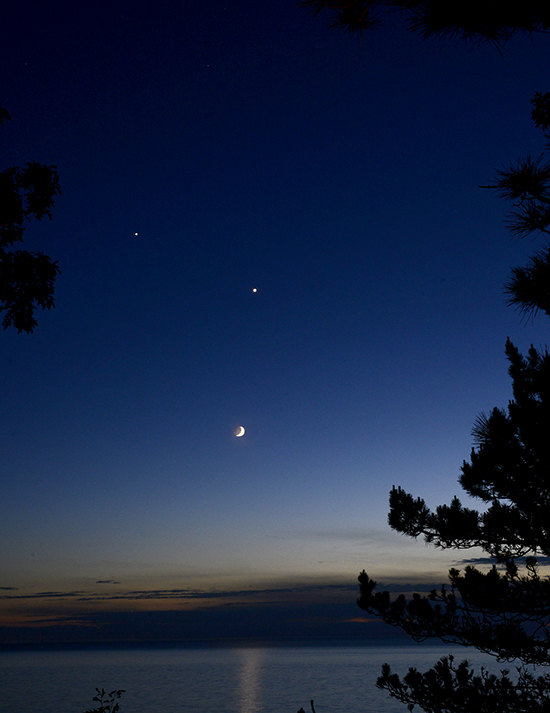 Six years ago this week we perched on the deck of a friend’s cottage 200′ above Lake Michigan, atop the spine of sand dunes north of the small town of Pentwater. Semi-libated and fully sated beneath crystal skies and the dying fire of sunset, the slow, dramatic transition of color and form was neither anticipated nor really noticed. Sun had set at 9:30 and twilight’s scattered streaks of red and orange slowly dissolved as the celestial dome of the night sky was cast into deep, blue black. A waxing crescent moon, stars and planets, imperceptible at first, presented in growing relief, taking form against the blue and violet hues of the firmament, reminiscent of “Starry Night”.
For the first time I sensed yet another dimension of Van Gogh’s genius through his use of so many blue pigments in the painting (21 according to scholars); color transitions not unlike the sky above us that evening. Coincidentally, if not auspiciously, “Starry Night” also featured a crescent moon and Venus, though that is where the comparisons appear to end.
Having created the work during his internment in the St. Paul de Mausole asylum, elements of the painting, (e.g. vortices suggesting turbulence in a river of light) may represent the struggle and pace of an unquiet mind. By contrast, the scene depicted in the photograph here suggests tranquility, profound stillness and, perhaps most strikingly, the deep irony of three objects hanging in simplicity, radiating unfathomed complexity and mystery.
Read More