Nothing like a February romance. Even a snuggle appears beautiful but illicit among starlings.
Read More
Fri03 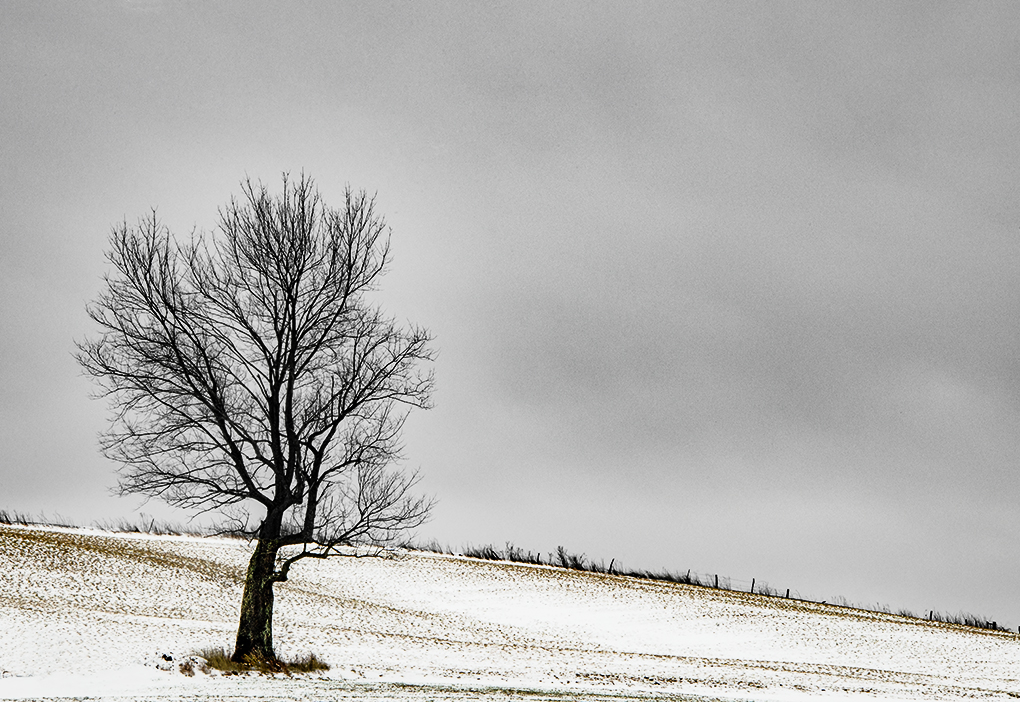 A trip to Mantua, Ohio today (Saturday, Jan. 29th) almost went unrewarded in search of the “Tummonds Bog”, a natural wetland and nature preserve, managed by the Ohio DNR and virtually impossible to find. After an hour wrestling with Siri and the directions of Mapquest, then another making concentric circles looking for the trailhead, I resolved to try another day.
In a serendipitous twist, driving north on Rt. 44 from Mantua, I spotted this old maple in the distance on what appeared to be a 19th century farm. Silhouetted and standing alone against a gray sky, appearing to reach into the abyss, it likely marked several generations that had spared the tree from the time the land was first cleared.
Read More
Fri03

St. Theodosius Cathedral
This extraordinary Eastern Orthodox church, known or recognized by most Clevelanders, is a legacy of the 19th century, perched on Starkweather Ave. in Tremont overlooking a vast industrial landscape of steel mills. From its vantage point, one could watch as three to four successive generations of husbands, fathers and brothers  carried their lunch pails, descending the pitched slope each day to toil in the blast furnaces, coking ovens, open hearths, BOF’s, hot and cold strip mills and myriad support facilities that drove Cleveland’s economy through much of the 20th century.
Rt 490 and other freeways have severed the foot traffic that once wore paths down the steep grade of W. 7th.  The great assets of Republic Steel and Jones and Laughlin have since been been acquired by ArcelorMittal, a Luxembourg conglomerate. As industrial, economic, social and cultural changes have obscured much of Cleveland’s history in the last few decades, St. Theodosius still stands, listed on the National Register of Historic Places and still sustains a way of life and worship rapidly disappearing elsewhere.
Read More
Fri27

Posted on Jan, Fri, 2023 in Landscapes, Musings from Still Point 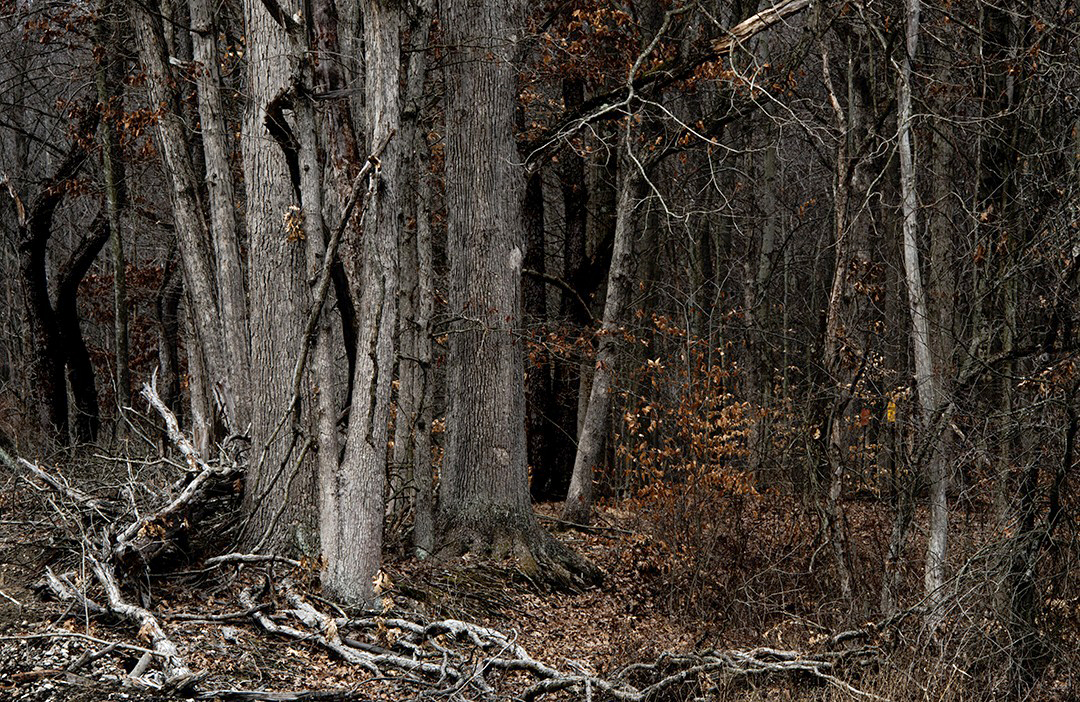 Last month I released a limited edition art book (“Still Point, … there the Dance Is”) featuring 60 landscape images of northeast Ohio and northern Michigan, each accompanied by an essay of mine. My intention was not for these short narratives to prejudice or preempt the individual response of others to the landscapes, rather I hoped the essays might provide a contextual bridge for the viewer/reader to find their own connections. My interest was in determining the benefit or detriment, if any, in providing the additional written stories or commentary as context.

With that as background, last week I posted the image (see below) on Facebook, “White Oaks, Between Snows, January”, as an “experiment”, promising to explain more about it this week. It hadn’t been my intent to raise expectations for something revelatory, only to glean some small, additional insight into the evocative nature of a scene known intimately to me but not the audience. In this instance, unlike the recent book, there was no essay, not even a short descriptive narrative to inform the image.

So, what does one see and what generates a response or creates a connection? And how similar or distinct is that connection between the artist and the observer? The title here provides only a small bit of context, identifying the species of tree, the season and month of the year. The only other information is visual; that which may be observed directly or inferred from the various elements in the image itself. Whether or not a viewer connects in some way would seem to depend upon experiences and associations held in his or her personal inventory. Beyond that, there is the instinctive or intuitive response to the aesthetic -also dependent on experience and association. Since the posting I’ve had only a few responses; a few on FB and a few others in offline conversations.

George Bilgere, one of this country’s acclaimed poets, found connection through the visual elements, “I like that burn and sparkle of energy, the glitter of the winter-resistant leaves in the middle. … but I do sense the image’s forthright power.” And Michigan artist, Chris Hammack saw the trees as “silent observers”, much as I have personified them in my own mind. Another artist and friend, Laurel Hecht, commented, “The deep dark woods in the back..fun to think about.” This sense of mystery represents much of my own attraction to the image and locale as I visit here every week or two and experience a similar reaction each time, one I had hoped to communicate through the photograph.

This issue has far broader implications with respect to art and has been deliberated for centuries no doubt. The question which remains unclear here is, to what extent context or disclosure informs or detracts from a painting, a book, a photograph, a musical composition, etc.? There is no correct answer really, only the artist’s “intent” and ultimate judgement as to what information if any should be included to fulfill that intent. Some artists prefer that the observer draw on personal experience and associations to arrive at an interpretation; others write long disquisitions describing their work and process in minute detail to ensure it will be interpreted as intended. Providing clues or subtle detail through the title may be the most direct way but it remains unsatisfying to me personally. I hope to explore this universal question as time passes and welcome the thoughts of any who had the patience to read this post or the inclination to read the essays that I’ve drawn upon to illustrate the images in my new book.
Read More
Mon09

Posted on Jan, Mon, 2023 in Landscapes, Musings from Still Point 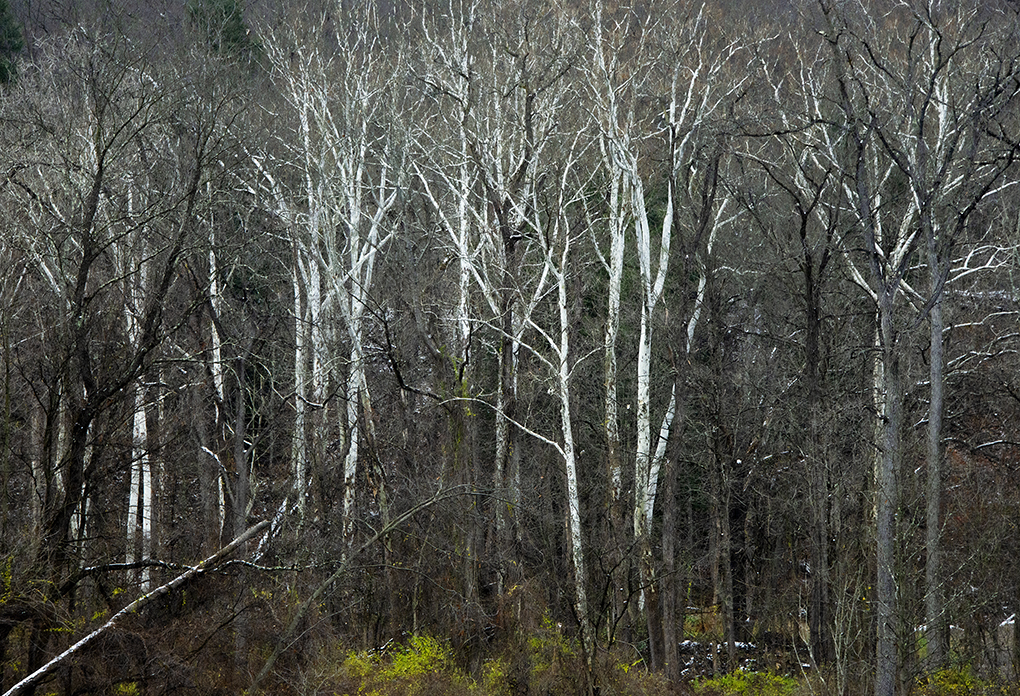 John Ruskin, many western scholars would assert, was the 19th century’s most famous art critic, though his reputation at that time as a polymath and contemporary Renaissance man elevated him into even higher spheres of ideas and endeavors. An extraordinary draftsman, watercolorist and philosopher, he championed the interrelationship of nature, art and society, positing:

“Nature is painting for us, day after day, pictures of infinite beauty.” J. Ruskin

In the spirit of his observation and my own obsession with American Sycamores, I post this image taken yesterday (November 30) late in the day after a light snow collected in the crevices and shadows of the forest floor just above the banks of the Chagrin River. This image, I think, is eerily reminiscent of Gustav Klimt’s slightly abstract portrayal of trees, especially the beech and birch forests that attracted him.

I would note there is no saturation or Photoshop compensation here, simply “nature painting for us … pictures of infinite beauty.”
Read More
Wed04

Posted on Jan, Wed, 2023 in Uncategorized 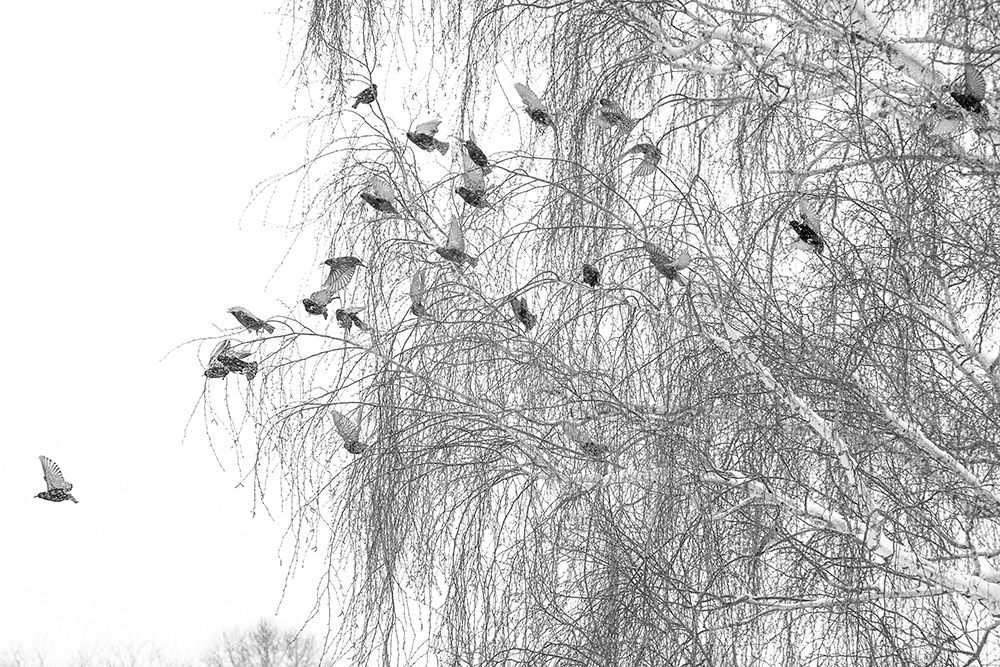 This image, a companion to my previous post of starlings, perched and pensive in the weeping birch, illustrates a sense of unity, even in their urgent departure pictured here. Seemingly unperturbed at first by my conspicuous approach and maladroit struggle in the freezing snow with camera and tripod, they struck me more as amused than frightened. For a brief moment I had deluded myself into believing I might be a “bird whisperer”; otherwise why had they remained affixed so calmly to the branches? Looking at this second image, however, I am disabused of any such notion.

That day’s brief encounter and these images have occasioned further reflection on these beautiful yet pernicious birds. Property destruction by starlings is legendary, replete with stories of farmers losing entire crops in an afternoon as birds would descend in locust-like waves. And, our own experience in Cleveland Hts. underscores those stories as we’ve watched small flocks drop into the yard this week, emptying the feeder in less than an hour. Moreover, we’ve seen them in the spring raiding robin’s nests, devouring newly hatched chicks – a practical though disturbing means of ethnic cleansing and sating hunger.

So, while antipathy towards starlings abounds, there is an undeniable, extraordinary beauty to these birds, not only their physical form but in their flight, ascending, swarming, swirling and coalescing into an undulating flow of amorphous murmuration. Perhaps, if there is a message, a moral or an enigma to these recent images, it lies in the dichotomy between beauty and its antithesis, dependent both upon context and the elusive definition of beauty itself. Although philosophers since Plato, and poets and artists through millennia have grappled with defining and expanding the concept of beauty (including its relationship to the arts and its influence on aesthetics), one also might look to the lowly starling when considering the many aspects of beauty; their physical perfection, their art as observed in the skies, and even their moral turpitude as they coalesce in flight, casting a shadow across creation.

“Chagrin River, Wraiths of the Season” 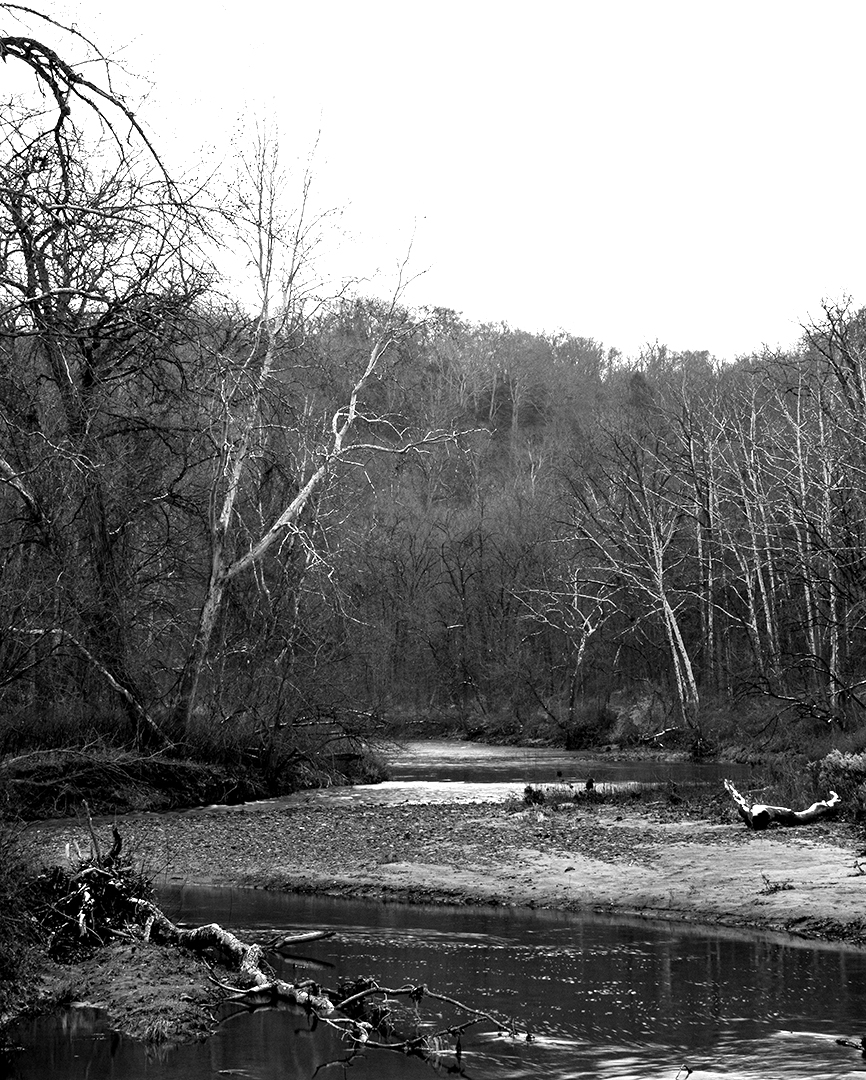 “Chagrin River, Wraiths of the Season”

Driving along Chagrin River Road, winding north from Rt. 87 another three tortuous miles as the road traces the river and escarpment into the village of Gates Mills, one is mesmerized by the desolate beauty that has arrived overnight. Northern Ohio’s autumn landscape is frequently transformed in the course of an evening as the deciduous forests that descend into the Chagrin Valley surrender their color to the cold winds of November.

Each year the sudden manifestation of ghostly sycamores (image above) unnerves me, appearing specter-like in a brief moment. Beech and birch, maple and oak, even black cherry shedding their luminous colors overnight, leaving behind the bones of great American sycamores. Standing like sentries, dendritic arms stretching to us who would tremble, holding dominion only to recede into the verdant masks of May.
Read More
« Older Entries