Posted on Oct, Wed, 2020 in Uncategorized 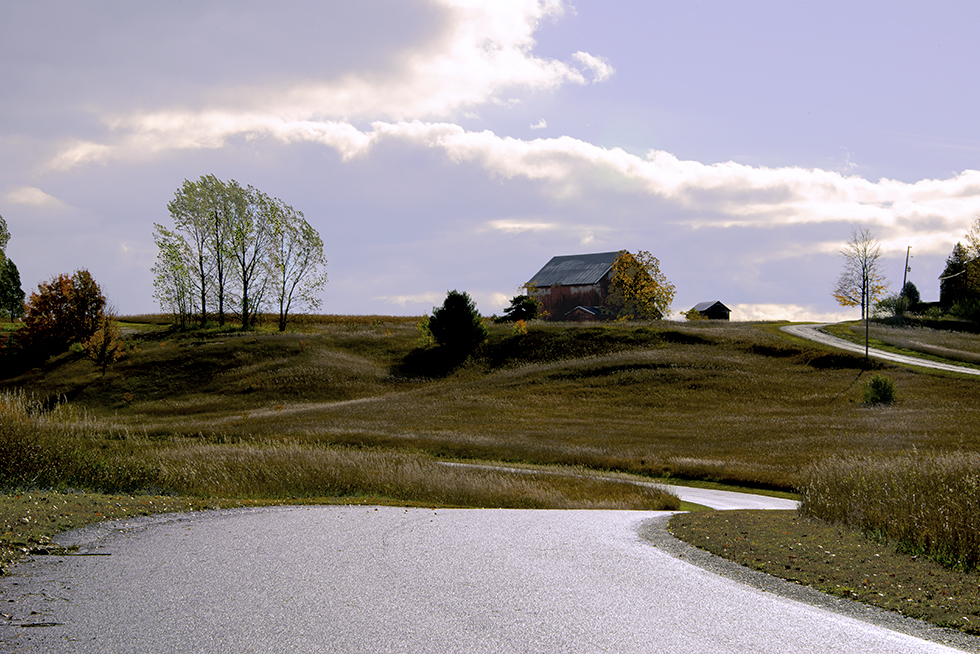 Sunrise brings form to the farms here in Leelanau county where the sweep of wind across the dunes is like the music of antiquity. 10,000 years ago the last glacier left deposits of quartz, ground through the millennia to sand by the weight of an ice sheet over a mile high, creating in its retreat the largest area of “lake” dunes on earth. Mimicking undulating sine waves continually recast by the winds, the dune fields advanced across Michigan providing a footing for timber, orchards, crops, cattle and wildlife. Traveling through these mountainous mounds one senses the mutability of time, the endless rhythms of the landscape, all coalescing into an ensemble, not of time only but a harmony of the trees, grass, sand and water. Like ancient tumuli, these migrating dunes honor a continuous narrative of the past.
Varieties of late autumn grasses provide the visual texture. At their origin along the Niagara escarpment, the sand dunes of Michigan’s northern lower peninsula follow Lake Michigan’s eastern shore from the Straits of Mackinaw to northern Indiana, their path swinging briefly north from Traverse City passing through the 45th parallel and the small town of Suttons Bay. Fifteen miles beyond, the dunes arc to the west around the northern tip of the Leelanau peninsula and dip southward past the Great Sleeping Bear dunes before traveling 300 miles south to Indiana less than 50 miles short of Chicago.
It was on the outskirts of Suttons Bay, however, that this sunrise scene presented itself in late October five years ago. Even the small roads and drives seem to trace the contours of the land. I thought this scene, illuminated by early light and long shadows, captured the visual rhythms and texture of the dunes. Swales and hollows form providing an anchor for vegetation as grass traps windblown sand. This image represents the typical farm with its sometimes random, sometimes deliberate copse of poplar that serves to arrest the landscape’s inexorable flow. Maples, cedar, oak, juniper, marram and bluestem grass are all visible in the landscape.
In the midst of today’s political and economic turmoil and the worst epidemic since 1918, Leelanau, County, Michigan provides a healing landscape and a magical outpost of nature for the weary. My earnest hope is for each of you to visit one day.