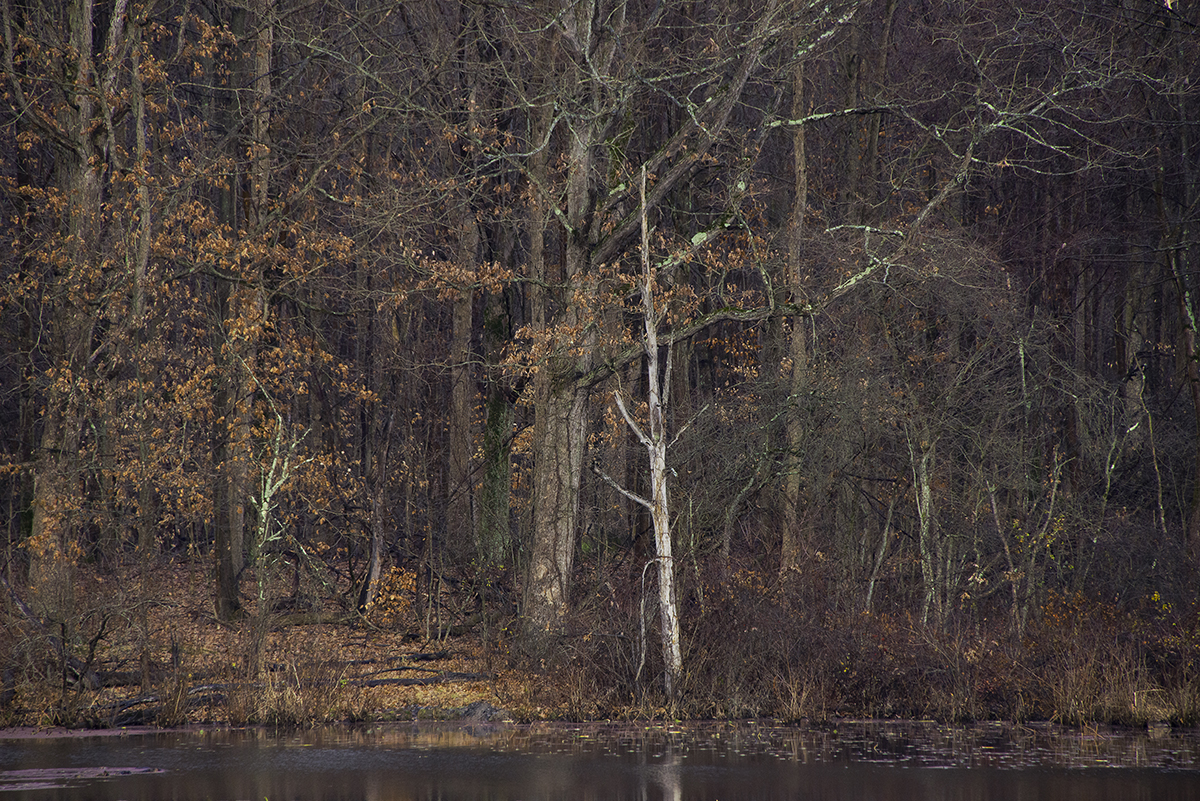 This reflection starts out part musing and part story; as accurate as reconstructed memories can be and hopefully with just enough narrative to hold it together. And as to its ultimate destination, I’m not quite sure as I begin. The image I’ve posted below is evocative for me, though to a random viewer it must appear more than a little drab without benefit of additional context. In a twist on convention I’ll try to “illustrate” the image through descriptive prose.

The setting, a wetland marsh in Aurora, Ohio, has been a haven for sedge grass, rushes and reeds, and a refuge for native wildlife and migratory waterfowl since the founding of the town over two centuries ago. A short hike from my childhood home, the area was a daily destination along a dirt road, across a field and down a deer trail.

A close look at the photograph depicts its perimeter of trees, deadfalls, brush and vine that camouflage the interior woodland. Adding to the natural ramparts along the forest’s edge, thickets and brambles, mostly hawthorn and dewberries, twist and twine to fill the openings. Frequently I’ve breached this outer boundary to enter the other world, 200 feet beyond the western bank of the marsh where the crowns of maple, oak and beech coalesce into a towering canopy and where my own memories still stir. It’s been in this very location over the last 65 years that I’ve forged a bond with the land and gained an understanding of the term, “still point” – an allusion to T.S. Eliot’s “Burnt Norton”, (an exegesis of time and salvation).

The scene pictured here begins at the edge of winter, before the early snows when the last leaves linger and splashes of hoary lichen paint dead trees in neon, and auburn confetti textures the forest floor; only then are the tunnels and pathways to the interior made visible. From late spring through autumn, these thorny, between-world entrances, gateways really, are concealed in prehensile vines and broad-leafed branches. Byzantine animal trails that allow access today are the same that led me between the world of wetlands and woods so many years ago. Once inside, a sanctuary as open and cavernous as a cathedral awaits – nature’s enclave for mind and spirit.
Beneath the canopy, stippled light and leaves and young beech position themselves at intervals across the forest floor, their paper leaves rattling and tenacious, beyond the reach of winter, erect across the forest floor. And the earthy scent of detritus and pine mix with time and space to provoke the imagination. This was always the place to consider possibilities, to reassess friendships, to chew on ideas, to consider such abstract propositions and constructs as infinity and creation, the nature of time and the early metaphysical propositions to which a child is first introduced, where the quotidian and extraordinary share the same space.

At times I suspect we’ve all had places, physical places, safe harbors where we could retreat to contemplate, where time loses dimension and meaning, where troubles and ideas collide, mingle, and perhaps, if we are particularly fortunate, bring clarity.

This is the beginning I realize. Much more remains to be told.