Posted on Mar, Thu, 2022 in Landscapes, Musings from Still Point 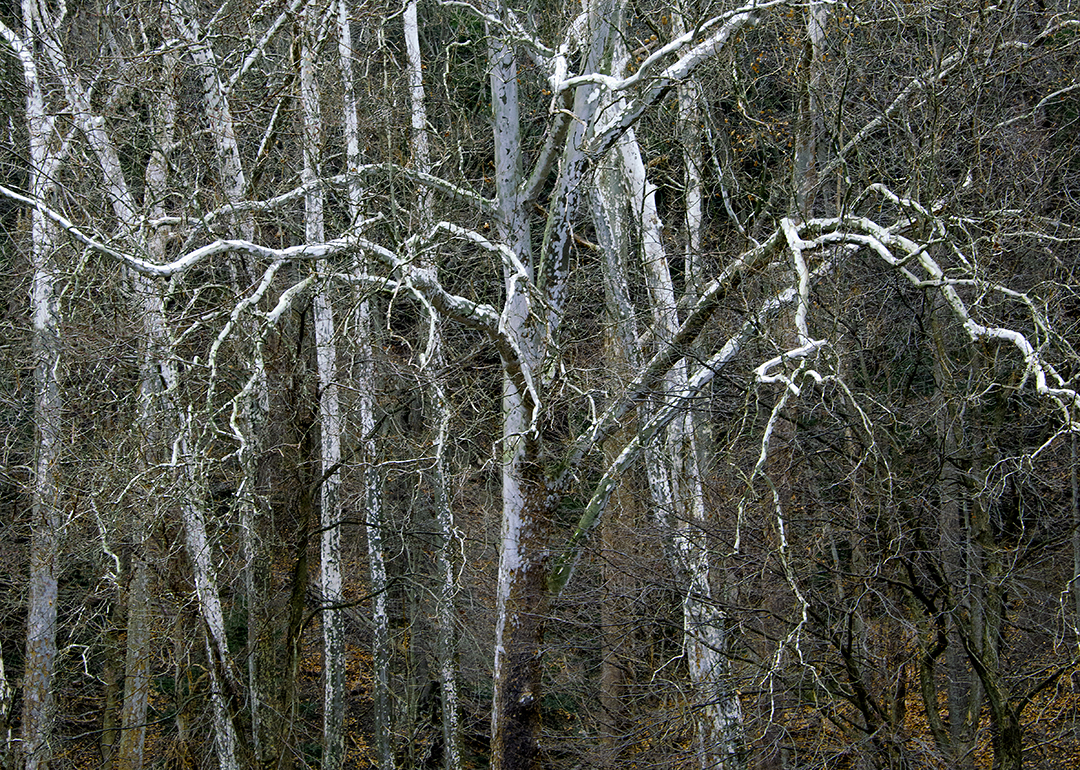 “Sycamore Copse”
Taken in early December, this image commemorates a custom I began 20 years ago when returning to Gates Mills, Ohio each year to photograph the same grove of trees. There’s a short story behind this for any with the interest and patience to read on.

Most who know me are aware of my obsession with sycamore trees, the American sycamore specifically, their roots plumbing my imagination since childhood … a fascination likely imprinted on an aberrant gene. As a young boy, hiking in the deep woods of winter, I would pass sycamores along the same creeks that still feed the Chagrin river. Odd for a child to be absorbed so by trees but these gangly apparitions seemed somehow familiar and benign, reminding me of my family and our small community.

Almost 70 years ago, a fortuitous change in plans, the reason for which I no longer remember, caused my mother to drive an additional 30 minutes from our home in Aurora, beyond our intended destination of Chagrin Falls, on to Gates Mills, a picturesque, little village that exists yet today in the heart of the Connecticut Western Reserve. A quarter mile south of town, on the narrow road that traces the Chagrin River, we rounded a curve and were confronted by a grove of giant sycamores. Smaller than a grove actually, a copse perhaps, these ghostly white trees had shed their summer vestments and were imploring us from the opposite bank, a welcoming gesture it seemed. The sycamores, desperately curious, their wizened, articulating arms and twisted hands, lending a human aspect, the tree’s roots mirroring its branches, twisting beneath the surface in the sandy loam banks above the river.

Drawn back to the village over 20 years ago, I began the annual practice in early December photographing that same sycamore grove, still standing across the river from the intersection of Deerfield and Chagrin River Roads. These images serve as records of the trees, growing long before I was born, jostling for position as they cradle the dark-edged cumulus clouds that descend over the Chagrin Valley early each winter.