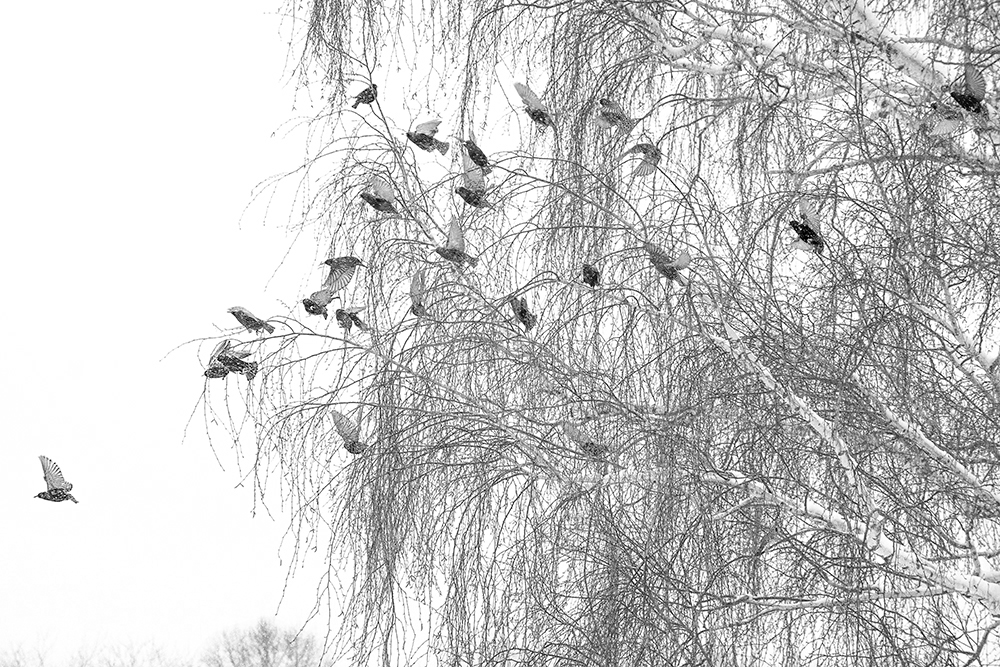 This image, a companion to my previous post of starlings perched pensively in this weeping birch, illustrates a sense of unity, even in their urgent departure pictured here. Seemingly unperturbed at first by my conspicuous approach and maladroit struggle with camera and tripod in freezing snow, they struck me more as amused than frightened. For a brief moment I had deluded myself into believing I might be a “bird whisperer”; otherwise why had they remained affixed so calmly to the branches? Looking at this second image, however, their alacritous exodus disabused me of any such notion.

That day’s brief encounter and these images have occasioned further reflection on these beautiful yet pernicious birds. Their destruction of property is legendary, replete with stories of farmers losing entire crops in an afternoon as starlings descended in locust-like waves.  Even our own experience in a small suburban setting underscores those stories as we’ve watched small flocks drop into the yard this week, emptying the feeder in less than an hour. Moreover, we’ve seen them in the spring raiding robin’s nests, devouring newly hatched chicks – a practical though disturbing means of ethnic cleansing and sating hunger.

So, while antipathy towards starlings abounds, there is an undeniable, extraordinary beauty to these birds, not only their physical form but in their flight, ascending, swarming, swirling and coalescing into an undulating flow of amorphous murmuration. Perhaps, if there is a message, a moral or an enigma to these recent images, it lies in the dichotomy between beauty and its antithesis, dependent both upon context and the elusive definition of beauty itself. Although philosophers since Plato, and poets and artists through millennia have grappled with defining and expanding the concept of beauty (including its relationship to the arts and its influence on aesthetics), one also might look to the lowly starling when considering the many aspects of beauty; their own physical perfection, their art as observed in the skies, and even their moral turpitude as they coalesce in flight, casting a shadow across creation.
January 23, 2022