Posted on Apr, Mon, 2020 in Uncategorized 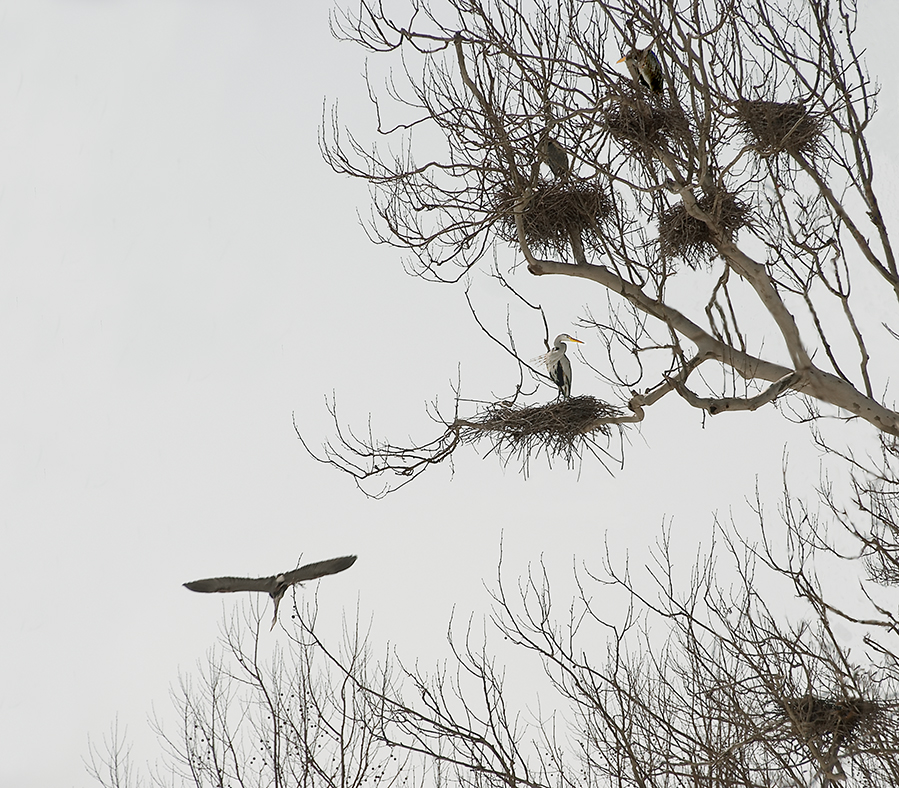 This image speaks to one of nature’s less well known contradictions; the great blue heron, a sacred totem and spirit animal among Native Americans, a symbol of serenity, self reliance and solitude in western cultures, an extraordinary creature whose virtues and universal reverence belie the absurdity of its behavior during mating season.

I took this photo thirteen years ago after Kate and I spotted a number (aka siege) of herons building nests in a large sycamore in Peninsula, Ohio. Apart from the highly agitated nest-bound females, the males also were contributing to the racket. After dutifully returning to their nests with individual sticks, the males quite naturally expected a little adulation for their efforts, volubly exhorting their mates to express gratitude. Adding to the dissonance, herons apparently aren’t above thievery as birds leaning precariously from their nests would stretch their necks to pilfer material from their neighbor. As transgressors were caught in the act, the tree would erupt with indignant shrieks, enough to disabuse anyone of the notion herons are silent and solitary.

All of this evoked a childhood memory as I recalled my fascination with “The Thurber Carnival”, a book and wedding present my parents kept on their coffee table. James Thurber’s drawings captivated me as a child, particularly one depicting “The Battle Between the Sexes” a satiric drawing of men and women wrestling and battering one another on an outside balcony – a scene that surfaced after languishing in my memory for almost sixty years and one in which substituting herons for humans could be easily imagined.