Posted on Nov, Sun, 2020 in Uncategorized 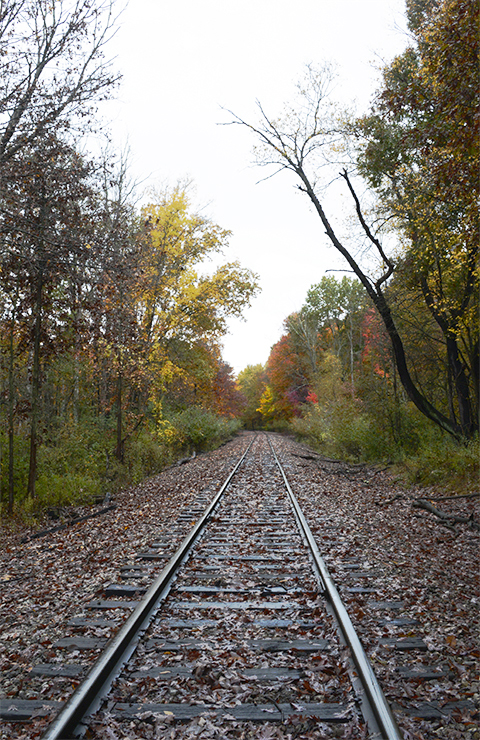 In 2007 I published “Autumn Rails I”, an image of this railroad track disappearing into the morning fog. Five years later (2012) I published “Autumn Rails II” taken from the same section of track in the blue light of early morning. The night before, heavy winds had stripped the trees of color, all except a small Hawthorne its auburn leaves intact, defiantly bracing into winter. This latest image was taken the last week in October. For me it’s a metaphor of promise, ephemeral of course, but one that augers well for future seasons of renewal.

Looking north into this frame the tracks form the western boundary of Schweitzer marsh. For five decades I’ve walked these rails, through each season, through the twilight of many mornings, through countless days and occasionally moonless nights.

Following a morning rain in late October this year I found myself seduced by the perspective, a narrow vista of burnished rails and colors converging, its sensate hues and geometry pulling me into a vanishing point. The element I found most provocative and compelling, however, was a black cherry tree listing overhead, content with the passage of time as it slowly, deliberately, etched its shape and form through space. This old tree, leaning in, its imperfect arch only inches above and beyond the passing trains seemed to taunt the cars closer. Something I could relate to, growing old, not yet fully resigned, a few leaves still clinging, still taunting.

The tree … an artist’s design?  Divine agency?  Nature’s beauty, arbitrary but unrelenting, finds its path … by an artist conceived, or a bird perhaps.